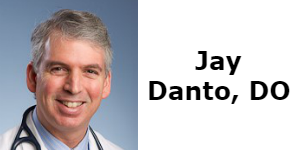 My family possesses a postcard that’s over a century old of my grandfather sitting on a political council in Lithuania that has the caption, “The world is round.  The world is small.  Who knows where we shall meet again.”

When just starting my clinical practice in Michigan in 1997, I had the opportunity to participate in the KCOM Family Practice Research Enrichment Program.  This program was designed to provide fundamental training in clinical research to interested physicians in the KCOM network.  Fellow participants included William Anderson, DO; Michael Kuchera, DO; Brian Degenhardt, DO; and many others.  This was well before I knew where I’d be today, but my appreciation for the relationships that were started at that time with the participants and the educators in the program continue to evolve.  Since that program, I was able to do a few practice-based research activities on my own, but DO-Touch.NET creates the opportunity to participate in significant research projects that would not otherwise be possible.  Therefore, foundations laid at KCOM 20 years ago that inspired my pursuit of conducting clinical research are being fulfilled through DO-Touch.NET! Jut as my grandfather’s postcard had implied, the circular nature of life persists.

I received my Bachelor of Science in Psychology and my Doctor of Osteopathic Medicine from Michigan State University (MSU) in East Lansing, Michigan.  Currently, I am the chair of the OMM department for Kansas City University (KCU) of Medicine and Biosciences – Joplin Campus and have the faculty rank of associate professor.  I am dually boarded in Family Practice/OMM and Osteopathic Neuromusculoskeletal Medicine.  I completed my internship and residency at St. John-Oakland Hospital in Madison Heights, Michigan.  After completing my residency, I helped start the first OMM residency program in Michigan, other than MSU’s, at Botsford General Hospital in Farmington Hills, Michigan.  Shortly after that, I went into private practice in OMM and integrated medicine for a decade.  While in private practice, I wrote articles that were published in the JAOA and a book, Normalization of Muscle Function, which was self-published (still available through the American Academy of Osteopathy and all proceeds go to the Academy).

Throughout my clinical practice, I have continued as a clinical educator for many COMs that send third- and fourth-year students to Michigan.  In 2008, I deepened my commitment to education by teaching for a half day per week at MSU-COM, first in Lansing and then in Detroit during that campus’s inaugural year.  Inspired by this opportunity to work with first-year students, I inquired about other opportunities in osteopathic medical education.  I had a great opportunity to be the Vice Chair of Western University’s OMM department and help open the new campus in Lebanon, Oregon.  This was a great experience, but it wasn’t the right fit.  An opportunity to join the OMM department at ATSU-KCOM became available.  Going from helping to open two of the profession’s newest campuses to working at our founding campus was both breathtaking and heartwarming.  Re-reading books authored by Dr. Still and knowing that at any given time, I may have actually been standing in a place where he conceived or penned what I was reading was humbling and inspiring.  For an osteopath who loves osteopathy, being in Kirksville is like being on a drug that causes “Stillusional” thought (definition to be found on a poster in the Connell Information Technologies Center).

Leaving ATSU to start the new campus for KCU in Joplin, Missouri, was a tough decision.  Starting a new campus takes a lot of work, cooperation, and transparency at almost every level to create a cohesive multicampus system.  It is part of the legacy of Dr. Still that we are a growing profession.  Because we are growing at a rate that stretches our resources, my decision to move on and actively participate in the growing legacy came down to a combination of having previous experience in a similar role and my commitment to strengthening the osteopathic profession.  In the time that I’ve been at KCU, I’ve been moved by the leadership opportunity that I’ve been given.  I feel tremendously grateful for the opportunity to participate in DO-Touch.NET research and bring that with me to KCU!  In so many aspects, WE ARE STRONGER TOGETHER!