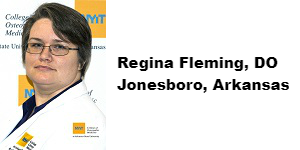 I had the honor of attending the founding school of osteopathic medicine – A.T. Still University Kirksville College of Osteopathic Medicine. During my first year, we had weekly UAAO (now called SAAO) meetings, most often led by Melicien Tettambel, DO. Thanks to her, I was exposed to the wondrous effects of osteopathic manipulative treatment on real patients from the start. I will never forget my first UAAO meeting. A classmate brought his wife who had lateral knee pain and was scheduled for exploratory surgery. Dr. Tettambel examined and treated the knee. One technique she used was called the “fish flop”. Named by a patient of hers, because the young boy thought it looked like a fish flopping about when she performed the articulatory technique on his fibula. After treatment, the patient’s lateral knee pain was gone. I asked my classmate several days later how his wife was doing. He stated that the pain was still gone, and they had canceled the surgery. As a medical student and an OMM fellow, I shadowed the OMM doctors in Kirksville every chance I got. It is thanks to their excellence in teaching OMM, their outstanding clinical skills, and their unwavering service to the student body that I am where I am today.

My first taste of clinical research came when I was an OMM fellow at KCOM. Together with my mentor, Karen Snider, DO, we published a couple articles. It was during this OMM fellowship that I was introduced to Brian Degenhardt, DO, and had the honor to work with him as well. Both Dr. Snider and Dr. Degenhardt are prime examples of what we should all strive for. Their tireless dedication to the future osteopathic physicians they teach, to osteopathic research, and to their patients is inspiring. The ripples they have created will be felt for countless generations to come.

I completed my residency in Kirksville in Neuromusculoskeletal Medicine & Osteopathic Manipulative Medicine with Karen Snider, DO, as my mentor and together we published another article. My first year out of residency, I became involved with DO-Touch.NET and have since been an active member in two of their research studies. Currently, I am working with Jennifer Xie, PhD in assessing the effects of OMT in relieving migraine headaches in a translational rodent model. Osteopathic research is vital for the future of our profession. We are currently living in the era of evidence based medicine and it is not enough to just tell stories of how our patients improve. No matter how remarkable they may be, we need data to support what we do.

Jonesboro and Arkansas, in general, while next door to Missouri is an osteopathically poor state. I look forward to bringing OMM to the area not only by treating my patients, but by hopefully instilling in my students respect and appreciation for OMM. Thus, they may carry the osteopathic torch further into the world.