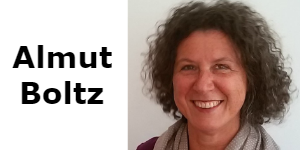 I learned of Andrew Taylor Still in my first hour at College Sutherland.  He had been a doctor, preacher, and farmer. I felt right at home. In my family, we have doctors, farmers, and a great aunt who bakes wonderful cakes and prays for people to be healed. There is also a line of schnapps distillers, but that is a distant branch of the family.

My path began as an apprentice in physiotherapy close to my home in east Westphalia, a region typical of German health resorts with Kneipp water therapy and strict catholic hospitals. Picture perfect! From there I moved to the then-divided city of Berlin. It was a culture shock! Eighteen months later, the Berlin Wall fell: a real celebration. Berlin, for all its contrasts and extremes, became my chosen hometown.

I then traveled to New Zealand for six months. It was during a hike in drizzly rain that I decided to take up my studies again. I became a student in the newly opened College Sutherland in Berlin. The occupational profile, at the time totally new, was defined by Marina Fuhrmann. With her boundless energy, she campaigned for the German Association of Osteopaths (VOD).  She was very successful!

After final exams, my life took off: I opened my own practice with a colleague with whom I continue to work; I met an American doctor who still refers patients to me today; and I have treated patients from all over the world who have taught me to be open minded.

I met my husband, an architect, who sharpened my view of structure and balance. Our daughter arrived and expanded our world. Inspired by them, I began training in pediatric osteopathy. This led me to volunteer in the “Kindersprechstunde,” osteopathic consultations for children and infants from low-income families. This experience strengthened my trust in the power and effectiveness of osteopathy. Because of the children, I also worked with their mothers, which awakened an interest in osteopathic gynecology. From that training, a working circle developed, one with which I hope to grow old.

At the 2016 Congress, Marina Fuhrmann stood before me once again, promoting the network, DO-Touch.NET. On that Sunday, as another fine drizzle fell, the Adverse Events study inspired me to become a member. I wasn’t sure my questions about side effects would be answered, but I was very curious about the study results.

Berlin is bursting with culture. Opera houses, theaters, orchestras, museums, palaces, and parks – a cultural landscape that leads us through the changing history of our country. Stunning nature, lakes, rivers, and woods to wander, swim, or paddle through. Without these possibilities – or the Wall – Berlin could not have become my home.

I wonder what would have happened if A.T. Still was just a doctor and farmer with a talent for mechanics. Or just a farmer and preacher. Or even preacher and doctor. Would the field of osteopathy have come about?

And so, I hope that within current German occupational politics we are aware of our own diversity and the opportunities for a lively, curious, and friendly career. We have learned that oxytocin is released through touch.  Well then!